On Aug 15 India celebrates freedom from British colonial rule.   Another struggle for freedom which started before Independence continues to be waged even now. It’s principal leader and champion was none other than Dr. B.R. Ambedkar, who crafted free India’s constitution. His struggle was for the emancipation of millions of people of (so-called) lower caste, especially Dalits, who suffer exclusion, oppression and servitude – social and economic – not by an external power but within the caste system.

Bhimrao Ramji Ambedkar, or Babasaheb as he was popularly called, was born on 14 April 1891 into a Mahar family which was one of the communities considered as untouchable in central India. He faced discrimination at school, where he had to sit apart from other children, so that he would not pollute the school floor. He could not drink water from the pot where other children drank. Undaunted he went for his undergraduate education in Mumbai, and continued further studies in Economics at Columbia University, where he received his PhD, and later at the London School of Economics, earning a D. Litt in Law.

While at Columbia, Ambedkar wrote his first piece on the issue of the caste ­system in India; an incisive essay titled, “Castes in India: Their Mechanism, Genesis and Development.” On his return to India, he once again faced discrimination. He had to move from job to job and between cities, as the stigma of being from a  lower caste clung to him. He spoke out against the oppression of the people of so-called lower castes, and argued that caste holds back progress in society, and needed to be destroyed. In 1927 he led the Mahad satyagraha and drank water from a public tank where untouchables were not allowed. In 1930 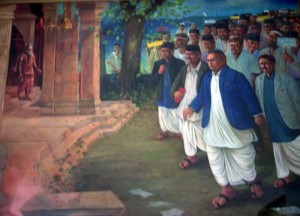 he led 15,000 people to the Kala Ram temple (pictured) for their first glimpse of the deity, and was denied entry. He popularized the term Dalit (oppressed, broken, crushed in Marathi) for the lower caste.

In 1936, Ambedkar published his famous pamphlet Annihilation of Caste which was a speech he was to have delivered in Lahore at an event which never came to pass because his invitation was withdrawn due to the content he had prepared.

After India’s independence from British rule in Aug 1947, since he was an outstanding legal and constitutional expert,  Ambedkar was invited to be India’s first Law Minister.   Soon thereafter he became Chairman of the Constitution Drafting Committee. Ambedkar made efforts to include several social and economic guarantees against caste discrimination in the constitution. The Constitution came into force in 1950.

In November 1956, he, along with several thousand of his supporters, converted to Buddhism in Nagpur. This was his act of protest against the Hindu social order which sanctioned the caste system.

Dr. Ambedkar passed away in Dec 1956. His call originally to Dalits to Educate, Agitate and Organize continues to inspire millions even today. Even as we remember Ambedkar’s contributions, untouchability and the ills of caste discrimination continue in various parts of India.  Members of oppressed castes can be forced to live outside of the main village and deprived of access to resources such as land, water, etc.  Inter­caste marriages continue to face opposition and severe retribution in some sections of Indian society. Every day, we hear news of rampant physical violence against Dalits, including sexual violence against Dalit women..

As we remember Ambedkar, AID pledges its solidarity to Dalit issues and urges volunteers and supporters to reflect on how discrimination against oppressed castes, and even the usage of the words upper and lower castes, can end. This independence day, we welcome you to support AID’s work. Let us Cast out Caste!

Home page graphic
The graphic depicts Dr. Ambedkar overseeing the destruction of a pyramid which represents the social ills he most vigorously struggled against, like the privileges associated with birth and the power of religious orthodoxy which dictate the sanctity of the caste system. The graphic spells out the exhortation “Cast Out Caste,” which pays tribute to Dr. Ambedkar’s classic work, Annihilation of Caste, and also serves as a call to all of us.

2 thoughts on “Tribute to Ambedkar”