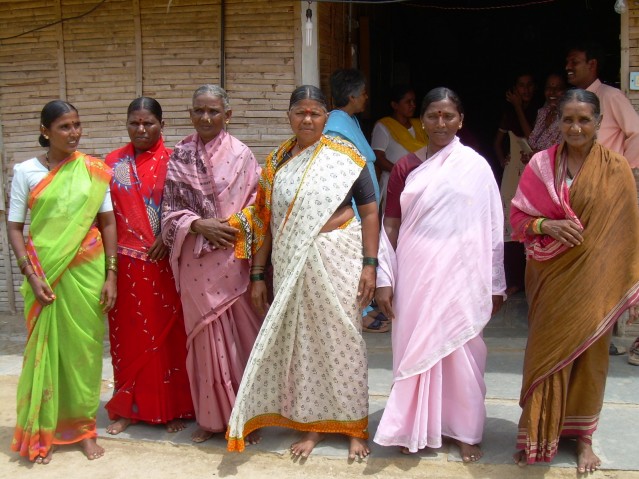 In the 1999-2000 period, Aravinda and Ravi of AID met Eddie Premdas, Neju, Mita and Koshy (students at TISS), who started working with Dalit youth Devaputhra, Chauramma, Narasappa and later Chaurappa and Ratnamma. They write about how the Dalit women’s collective Jagrutha Mahila Saghtan grew.

Jagrutha Mahila Sanghatan (JMS) is a Dalit women agricultural labourer’s collective with a membership of 3000 women from Dalit Madiga, Muslim and other communities from Manvi Taluka in Raichur district, Karnataka.

In 1999 local Dalit women along with youth from different parts of the country came together to address the ubiquitous nature of violence that women in the community faced. This included rape and sexual exploitation which frequently took the shape of caste atrocities along with wide spread domestic violence. Vigorously mobilising on this front, Dalit Madiga women of Raichur gained a collective voice as a Dalit women agricultural labourers.

While Jagrutha Mahila Sanghatan is an unregistered collective the members have formally joined Grameen Coolie Karmikara Sangathane, which is a union of daily wage workers in Karnataka. As part of this state-level union, the women have agitated for right to work and right to wages in the NREGA program and entitlements to rations, health and education services.  At the village level, the JMS remains committed to fighting issues of caste and gender based exploitation, discrimination, violence and any form of social injustice.

JMS has continued to advocate for maternal health rights and also to address other forms of violence such as domestic violence, marital violence, etc. As part of the liberation and social justice process, JMS is also running a bridge school called Chilipi School for Dalit children who themselves work as child labours or pledged labour to redeem the debt of their families.

AID has been in solidarity with JMS since its early years when we met with TISS students  in 1999-2000 period. AID chapters (DC Metro area, Penn State, North Carolina) linked with local NGOs to provide support and encouragement to some of the young activists who went  there and helped set initiatives such as community land development, local enterprises,  marketing of village products such as terra cotta jewellery and neem fertilizer, community health workers and herbal medicine unit.

Now completely managed by a team of dedicated sanchalakis (coordinators) who are all Dalit women, JMS continues to be a social experiment of development and empowerment with the ownership of the local women over the process as well as the agency of the organisation.  JMS has been awarded by the State and National Commission for Women for community leadership. One of the village enterprises, Chiguru, has become an independent business, autonomously run by a group of enterprising Dalit women leaders of JMS. Chiguru products remain popular at AID tables and events in many chapters and their sales help to support the community’s efforts for a more just society.

The process of JMS included the following:

To learn more about some of the ongoing initiatives, please visit JMS Chiguru.