Karthik, volunteer from AID-Dallas chapter, who has returned to Bangalore writes about his visits and interactions with Obalesh who hails from a community of manual scavengers and is founder of Thamate.

Jayamma, 35 yrs old, has been a contract sweeper in the Pavagada municipality for the last 13 years. She is the sole breadwinner for her family of 4, with 2 kids and her visually-impaired husband. While she is currently paid Rs. 5400/month, she was paid less than Rs. 1000/month till a few years back, for which she had to work both as a municipality sweeper, and also as an unpaid domestic help in the houses of various municipality officials, cleaning toilets, vessels, washing clothes etc, and also facing casteist assault, abuse and discrimination.

After she started participating in Thamate Community meetings in 2011, she voluntarily stepped up and took on the role of “women’s representative”, a  CBMG (Community Based Monitoring Group) leader, and regularly takes part in meetings with the same officials who used to treat her like a bonded labourer previously, organizes worker meetings and also independently manages group bank accounts.

Most pointedly, she has categorically refused to work in the officials’ houses, clearly stating that she will not continue doing slave labour any more.

The scourge of manual scavenging

State government reports continue to deny the existence of widespread manual scavenging in the state of Karnataka, but then reality is something else. I could scarcely hear Anjanappa, the first worker to speak up during my interaction with safai karmacharis in the Pavagada Taluk Gram Panchayat. Words came out as mere whispers, and it was not entirely a surprise, seeing his frail, racked body.

Anjanappa receives a little over Rs. 2000/month. He’s into his 36th year of service, having started on the job as a 13yr-old when his father died while still being employed in the same job. Manual scavenging, probably the casteist society’s longest running visible discrimination, is made to run in families. Almost all safai karmacharis working in Karnataka come from the Madiga community, one of the most marginalised Dalit communities in Karnataka. The Madiga community forms almost 50% of the 2.5 lakh-plus population of the Pavgada taluk. And, not surprisingly, all 99 safai karmacharis from the Pavgada taluk gram panchayat and the 43 from the municipality all hail from the Madiga community. 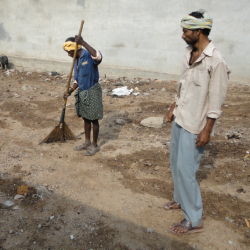 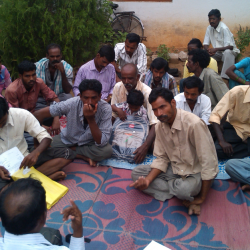 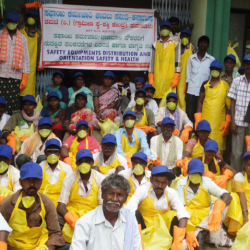 “The Thamate, a drum made from smoothed animal hide, is a distinct Madiga cultural instrument. However, the unique sound of the thamate has long been used to continue the slavery and the discrimination that existed for centuries, from the kings of yore to the gram panchayats of today to disburse information, celebrate festive occasions and deaths in upper caste families. Madigas were routinely called to beat the thamate for the entertainment of others but these very people have been treated as untouchables and ostracized from society for generations, in rural and urban settings. “From now on, the thamate will be used for the empowerment of the community. Hence, the name…” says Obalesh K. B., the founder of Thamate, a Madiga himself and hailing from a family of manual scavengers. Thamate, a registered NGO, has been working towards the eradication of manual scavenging in Karnataka, more specifically in the Tumkur district, using a three-pronged approach of empowerment, rehabilitation and affirmative action to end caste-based occupation and caste-based violence and atrocities.

For those who have been in this profession for decades together, Thamate is involved in mobililzing them and helping them form community-based monitoring groups , ensuring a fair wage (most workers don’t even get paid minimum wages), job permanency, access to social security benefits like PF, ESI, health cards, and also access to personal safety equipment. Obalesh’s remark that the general life expectancy of manual scavengers is only around 45, is testament to the dire need in this area.

For youngsters who have just started working in this profession,  the focus is on weaning them away from the profession before it is too late. Thamate helps them acquire vocational training through other institutes such as St. Joseph’s Community College (Bangalore), Unnati, and also help submit applications to Dr. Ambedkar Development Corporation for self-employment support. With Thamate’s help, people have been able to leave this inhuman profession and set up small shops that sell fruits, flowers, footwear and also canteens.

Lastly, but most also importantly, Thamate runs Bheema Shale, after-school tuition centres for children from these communities, to help them cope up with their academics. Obalesh spoke about the discrimination that these kids faced a few years back in the mid-day meal programs organized in local govt. schools. It was only after the issue was raised with the Block Educational Officer that the situation changed. However, while the mid-day meal situation has changed, Obalesh goes on, these kids continue to face more subtle forms of discrimination, with many teachers not giving enough time or attention to them, or even try to help them get better in their studies.Considering that the societal expectation is that kids from these families take up their parents’ scavenging jobs, Thamate’s intervention in this sphere is absolutely critical to ensuring this vicious cycle gets broken at the first step itself.

Besides his work with Thamate, Obalesh is also a part of the Safai Karmachari Kavalu Samithi (SKKS), a watchdog committee all over Karnataka, that conducts investigations into every safai karmachari or UGD (under-ground drainage) worker death (unfortunately an all-too common occurrence, with deaths happening almost every 2 months), publishes fact-finding reports and also helps secure just compensation for the affected families.

SKKS is working towards replicating Thamate’s efforts all over Karnataka, with the long-term goal being the destruction of the caste-system which has helped perpetrate this cyclical violence upon generations.

Prarambha, a Bangalore based NGO has actively been working on organizing safai karmachari workers in Karnataka. AID supports this work.  The Safai Karmachari Kavalu Samithi was conceptualised by Prof. Y.J.Rajendra, an academician and human rights activist, who’s also a consultant to Prarambha. Prarambha works closely with Thamate on this issue

AID stands in solidarity with Thamate which volunteers visit and learn from.

Even after our meeting with the safai karmacharis in Pavagada taluk got over, my mind kept going back to Anjanappa. I could not believe he was only 48 years old. Obalesh had earlier mentioned that the manual scavenging work ages people very quickly. I finally understood what he meant. But I still could not get my mind around it. Casting out caste, especially in its modern day avatars, isn’t going to be easy, but the least we could do is to heed the voice of Obalesh and the sounds of his Thamate. 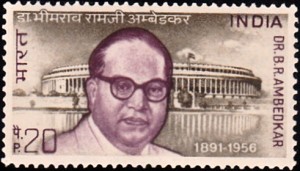